Season of Song and Sloops 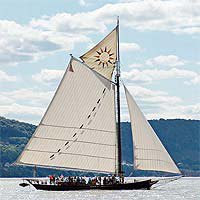 Just as the Museum is gearing up for Sea Music, a new book on Pete Seegar has been released. To Everything There is a Season: Pete Seegar and the Power of Song

"describes how folk singer Pete Seeger applied his musical talents to improve conditions for less fortunate people everywhere. This book uses Seeger's long life and wonderful songs to reflect on the important role folk music played in various protest movements and to answer such fundamental questions as: What was the source of Seeger's appeal? How did he capture the attention and affection of people around the world? And why is song such a powerful medium?"

The book also relates how it was "a young man at Connecticut's Mystic Seaport" that helped Pete find naval architect Cy Hamlin and design the iconic Hudson River Sloop Clearwater.
Posted by Kelly at 5:14 AM