When Sallie Smith went with her husband aboard the bark OHIO in search of whales in 1875, she would have rare moments of female companionship. To make up for that lack, she kept busy in a number of ways including working with her husband, Capt. Fred Smith, on creating scrimshaw pieces, writing a journal, and corresponding with friends at home. With no local post office available at sea, she counted on the vagaries of meeting up with other ships that would be heading into port where they could then post the letters. Weeks or months might pass before the opportunity to do so arose. In one letter to her friend Minnie Chace in 1876, she included a crude illustration of a whale hunt, utilizing a whale stamp to give shape to the whale being harpooned by her crew. In the illustration of her letters below, you can see the similarity between the actual whale stamp imprint on the left and her fanciful drawing on the right (which she signs with: "drawn by Smith the Artist").  The small clutch of letters were obtained by the Museum just a few weeks ago.

The Museum has more than 150 things belonging to Capt. Fred and Sallie, including two journals from aboard the OHIO, numerous scrimshaw pieces, a newly-acquired lapdesk and much more. The following illustration is from one of the journals kept during the voyage of the OHIO beginning in 1875. This hand-written account of the voyage came to the Museum in 1941 and had attached to it a hand-carved, wooden whale stamp in the likeness of a sperm whale. The impression on the journal page from the stamp is identical to the one on the letter above. Reuniting the journal and the letters after almost 140 years, and more than 70 years since the journal arrived at the Museum is a very satisfying experience, as well as instructional as the appearance of the whale stamp on both pieces acts as historical verification for both. Not that there was ever any doubt!

I'll Be Home For Christmas...So Don't Visit Until the New Year!

The Collections Research Center will be closed from December 23rd - January 7th. We will reopen Wednesday, January 8th. Happy Holidays.

At Sea with a Clipper Ship Captain and His Wife

When Captain Alexander Winsor, of clipper ship FLYING CLOUD fame, took command of the clipper HERALD OF THE MORNING in 1868 for a passage to San Francisco from New York, it was  to be in company with his second wife, Emily Pope Winsor. Capt. Winsor's first wife, Sarah, died in 1865 while Winsor was master of the clipper ship SEA SERPENT, and before long he took Emily's hand in marriage.
A recent gift to the Museum by a descendant of the Pope family consisted of a number of items belonging to Captain Winsor and Emily. A sea chest, telescope and billy club were among the items belonging to the good captain, but some of the more interesting pieces come via Emily Pope, including a lap desk with her name inscribed on it, a fascinating journal of her travels with Capt. Winsor aboard the HERALD OF THE MORNING and the following item, a handle to an umbrella belonging to Emily. The little ivory hand clutching the handle clearly bears the owner's name. 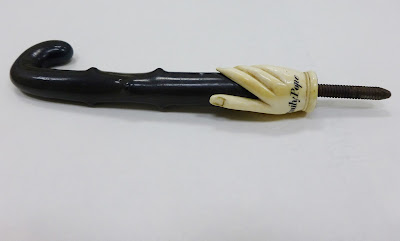 Unlike the somewhat spartan accommodations aboard a whaleship that we are used to reading about, Emily states that living aboard the HERALD afforded her, "a handsome dining room, large after cabin, with double staterooms on each side, with French bedstead, lung, etc., etc.".

Emily's journal and the artifacts that accompany it will be available for research and exhibition in the coming months.