Cruise of a Connecticut Privateer....

A logbook of a Connecticut privateer during the French and Indian War, also known as the Seven Years’ War, was purchased recently by the Museum. Commanded by Jesse Denison, the sloop DOLPHIN of Stonington cruised local and Caribbean waters in search of both French and Spanish prizes in 1762 and early 1763. Sanford Billings kept the logbook/journal that details some of the encounters of the DOLPHIN. 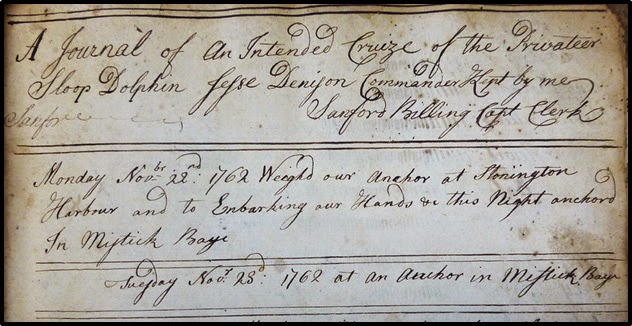 Two weeks after the Treaty of Paris was signed ending the war, the DOLPHIN’s crew (supposedly ignorant of the pact), in company with the crew of two ships from Philadelphia and Virginia, marched on a fort in Hispaniola:

“Landed 150 men all well armed and marched up to the town.
Found two cannon, six swivels. We took the Place…..
Returned on board the DOLPHIN all hands well
except one man wounded with a musquet ball in the shoulder.”

The following day they learned of the truce and made sail for home. As with so many other logbooks and journals, this one went on to have another life recording such things as school attendance by local students, accounts of goods bought and sold and Billings' family genealogy.
Posted by Paul O'Pecko at 5:49 AM