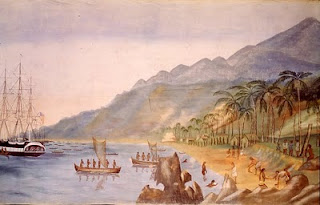 The New Bedford Whaling Museum recently brought a priceless object to Mystic Seaport for temporary storage while architectural work is being done at the Whaling Museum. Caleb Purrington's and Benjamin Russell's "Panorama of a Whaling Voyage Round the Worls" is being housed in the Collections research Center at Mystic Seaport until such time as new space is available at the NBWM.

According to Mary Jean Blasdale's "Artists of New Bedford" the panorama was created by the two artists in 1848 after Russell had completed a whaling voyage and he wanted to document it in images. The panorama is nearly 1,300 feet in length and painted on a canvas eight and one half feet high. It is currently stored on eight separate rolls that are ten feet long. The panorama traveled the United States in the 19th century and, like other panoramas of the time, served as a form of entertainment "similar to the motion picture travelogue of later days," as noted by Blasdale.

For more information on panoramas in general, go to http://en.wikipedia.org/wiki/Moving_Panorama

The accompanying picture is one frame of the panel and the short video shows the placement of one roll of the panorama into its new temporary storage area.
Posted by Paul O'Pecko at 5:50 AM