Artist Charles Raleigh moved to New Bedford in 1877, the same year that Capt. Thomas Crapo made the decision to seek fame and fortune by sailing across the Atlantic from that port to England in a boat just under 20 feet in length. Raleigh captured the event and the painting now lives at Mystic Seaport.

﻿﻿
The strange event was made stranger yet when Crapo acquiesced to his wife's request to join him. The two set off in their modified whaleboat built especially for the trip in June of 1877. After 56 days at sea, with the expected trials and tribulations behind them, they arrived in England to great fanfare. Returning home to New Bedford the next year, the Crapos took their show on the road and attracted thousands to hear their story. Twenty-two years after their voyage, Capt. Crapo once again got the urge to do something unusual to attract attention. In 1899 he left Newport in a boat less than 10 feet in length in an attempt to sail to Cuba. This time the ending was not so happy. Caught in a storm, Crapo capsized and drowned, having made it as far as South Carolina. He lives on through the work of Charles Raleigh.
Posted by Paul O'Pecko at 5:49 AM 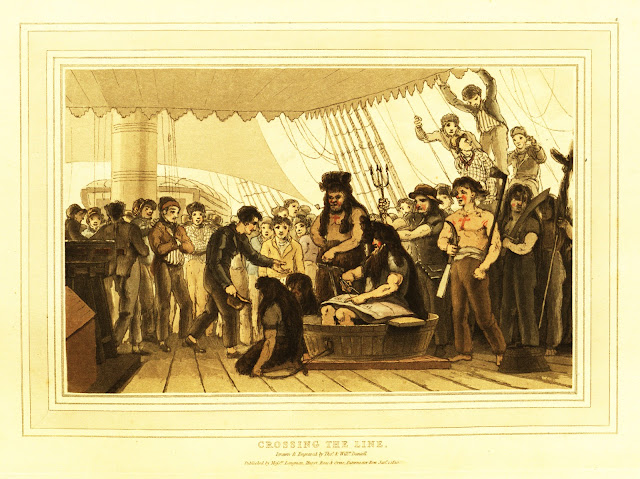 A crossing-the-line ceremony is something that many naval and merchant seamen have experienced over the centuries. Traditionally when a vessel passes over the equator, any sailor aboard that is also crossing for the first time is initiated into the brotherhood of shellbacks by King Neptune himself, attended by his lovely court, of course. Duckings, being “shaved” with giant implements, dosing with some sort of medicinal potion and being smeared with tar are just some of the events that might take place during a mandatory appearance at the good King’s court. Nowadays, certificates of such a graduation into the ranks are even made available to the “lucky” inductee.

The accompanying image is a plate taken from a rare book in the G.W. Blunt White Library’s collection at Mystic Seaport. “Crossing the Line” is from A Picturesque Voyage to India : by the Way of China, by Thomas Daniell and William Daniell published in London in 1810 by  Longman, Hurst, Rees, and Orme [etc.]
Posted by Paul O'Pecko at 1:10 PM