George Tobin (1768-1838) was third lieutenant on HMS Providence on Captain William Bligh's second voyage to obtain breadfruit plants from Tahiti and take them to Jamaica.  Tobin became an artist on the voyage when the official artist was too ill to join the ship. Throughout the voyage he sketched views and natural history specimens, notably birds and fish, in most of the places visited. Tobin continued to pursue both his artistic and maritime career become a renown artist.

In 1939 Mystic Seaport became the proud holders of one of Tobin's sketchbook, preserved in the Manuscripts Collection and now available online.
Posted by Kelly at 11:51 AM 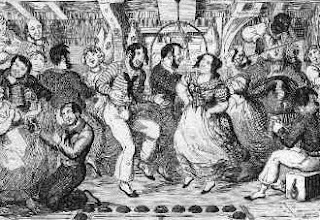 The Collections Department at Mystic Seaport is a great place to start exploring topics for music of the sea. Visit our catalogs to get an idea of the breadth of music-related subjects held in our various collections.

The annual Sea Music Festival will be held at Mystic Seaport in June, 2010. The official call for papers, submission by February 28, 2010, can be found at:

Celebrating the End of A Season

As a great (maritime) songwriter once wrote you can't "reason with hurricane season"*,  but you can celebrate the end of yet another. Yesterday marked the official end of the 2009 season and the folks in the Collections are especially happy to have not put our emergency plan into action.  When a hurricane hits a coastal museum - there is a lot of work to do securing the site from wind and waves.

Take a stroll through our Hurricane Image Archive and I'm sure you'll join us in the Celebration.