Registration for annual conference (13-17 May 2009) of the North American
Society of Oceanic Historians (NASOH) is now live. Please visit www.nasoh.org
for full registration details.
Posted by Kelly at 6:10 AM

Newly cataloged items from the Daniel S. Gregory Ships Plans Library include construction detail illustrations of the CHARLES W. MORGAN by noted marine artist and one-time staff member Kathy L. Bray. These exquisite and highly detailed illustrations are not only works of art but they offer documentation of original construction techniques used on the CHARLES W. MORGAN in addition to providing guidance to museum shipwrights during on-going restoration projects today. You can view the images online at http://mobius.mysticseaport.org/info.php?s=sp.1986.40.60.&type=all&t=objects.
Posted by Beth at 6:52 AM

Right now, at that very computer under your fingertips, you can view the first edition of Rudder Magazine. Published in 1890 this edition is the first of many that Mystic Seaport will be putting online. As to the final format, that is under discussion. Please page through, think about the possibilities and make suggestions.
Posted by Kelly at 6:11 AM

Taking the Sea: Perilous Waters, Sunken Ships, and the True Story of the Legendary Wrecker Captains

, tells the story of the wreckers, men who "faced the savage seas to save foundering ships and frightened passengers."

By the mid-19th century, an intrepid, reckless group of men ruled the ocean. Known as “wreckers,” they earned their living by rescuing and raising sunken ships, even in the face of monstrous waves and fierce weather. To some, they were heroes, helping to rescue both passengers and ships with courage and skill. To others they were ruthless pirates, who exploited these shipwrecks purely for their treasure.

Powers introduction gives a shout out to Amy German and Wendy Schnur for their assistance in researching the book, especially their help with material on Merritt, Scott and Chapman, of which there is a great deal in the Collections.
Posted by Kelly at 3:41 AM

Mystic Seaport's Bethany Bromwell is the proud new author of Mothers of the Sea: Female Lighthouse Keepers and Their Image and Role Within Society 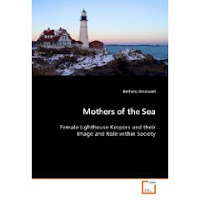 Lighthouses are an endearing symbol of our nation's nautical past. However, these structures are quickly disappearing from the landscape and with them often go their history and the important part that they played in the development of the United States. The stories of the men and women who cared for these structures during their times of use are also lost. This book examines the often overlooked role of the female lighthouse keeper. Female keepers were women who took on a traditionally masculine position. They held a government job and performed intense physical labor at a time when women were considered incapable of such jobs. This study examines the history of individual female lighthouse keepers and the contributions they made within the context of maritime history and public policy, as these issues related to American and British society over the last 200 years. It also considers the affects that governmental changes had on these women and what role they have played in popular culture both in the past and today.

As a past, fascinating, and informative presenter at the Maritime Lunchure, Bethany graduated from Gettysburg College in 2006 where she majored in History. In May, 2008 she graduated from the University of Maryland, Baltimore County with a Masters in Public History. She currently works at Mystic Seaport where she continues to research women and the sea.
Posted by Kelly at 4:58 AM

New additions to the Philip L. Rhodes manuscript collection (Coll. 312) include design data notebooks that contain drawings and measurements and calculations for weight, size, displacement, and speed for many of his designs. This manuscript material complements the time line of the material contained within the Philip L. Rhodes ships plans collection (SP Coll. 80).
Posted by Beth at 11:58 AM

In the popular imagination, sailors’ valentines (like scrimshaw) were made aboard ship by homesick seamen who occupied their dog watch leisure time fabricating intricate patterns with shells they had collected on exotic beaches. Although mariners did collect shells during their travels, most sailors’ valentines were made from fewer than twenty varieties of shells, usually all of which are found in the West Indies. Research on the styles and composition of sailors` valentines indicates that most of the pieces popularly called sailors’ valentines were, in fact, made in the West Indies—particularly Barbados—and purchased there by visitors, whether they were sailors or travelers for pleasure. Thus, most were neither sailor—made nor strictly St. Valentines Day gifts.