Christmas on the CHARLES W. MORGAN, 1889 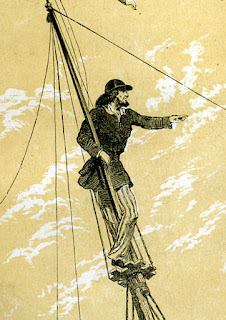 The G.W. Blunt White Library recently received a journal for the 1889-90 voyage of the CHARLES W. MORGAN out of San Francisco. There has been tremendous interest in this journal, because the keeper, Honorio A. Martin, the second mate, along with the crew of his boat, were left behind by the MORGAN after a Nantucket sleigh ride took them out of range of the ship. They eventually ended up on Sakhalin Island (as reported in the papers of the time), were initially arrested, then made their way to Hong Kong before eventually getting back to San Francisco a month after the MORGAN had returned.

However, the initial part of the voyage was uneventful, and a melancholy second mate Martin recorded the following on the 21st day out of San Francisco as they headed for the Japan and Okhotsk grounds:

"Wednesday, December 25th. Another Christmas is passed by. Still I am wandering on the high seas without a home or abiding place. I wonder how many more I have to pass at sea. Not many, I hope. I am almost tired of this sea life and as soon as possible I will leave it and try to make a living on shore. Today we finished overhauling forward."

Well, his holiday blues and his later brush with death did not dissuade him from doing at least one more voyage as his journal picks up again in 1891 aboard the bark TRITON leaving on a whaling voyage out of San Francisco.

The journal will be available for research purposes once it is cataloged.
Posted by Paul O'Pecko at 12:36 PM