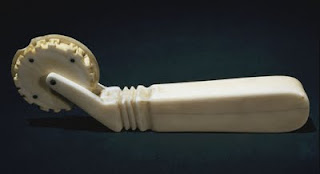 With the relentless advance of the seasons, and Fall creeping up on us, the thought of a good harvest of apples brings to mind the thought of pies. At least for me.....

Pies have always been a staple in the American diet, and pies were made with all sorts of fillings. However, many homemakers took a special interest in the decoration of their crusts and pie crimpers were made with that thought in mind. The trimming or decoration of dough for a pie made the crimper a very utilitarian object in the kitchen, and a whaleman with a little bit of time on his hands and some talent in the area of carving could produce some interesting crimpers.

The crimper pictured here is actually a very simple design for the most part. Many have handles that are exquisite in their piercings and framework. This single handled crimper looks more like a modern pizza cutter than anything else. However, according to Richard Malley in his book GRAVEN BY THE FISHERMEN THEMSELVES, he states, "What makes this piece unusual..is the recessed edge of the cutting disk on which is carved reverse lettering in high relief. When used to cut dough, the crimper, with each full turn of the wheel, boldly prints along the edge the message "GOOD PIE WELL MADE."