Fish Facts for the Fourth

It was the efforts of the British government to restrict New England fishing, and fishing commerce that started the Revolution not, as you've been led to believe tea and "taxation without representation." And Christopher Magra's written the book to prove it. The Fisherman's Cause: Atlantic Commerce and Maritime Dimensions of the American Revolution


And did you know, that during the famous crossing of the Delaware in 1776 General Henry Knox recalled that the crossing was led by the "fishermen of marblehead, alike at home upon land or water."

Just goes to show, once again, that American history is maritime history.
Posted by Kelly at 9:12 AM

I Love the CRC

The American Library Association is showcasing the Mystic Seaport Collections Research Center at ilovelibraries.org. The article written by Tom Newman, and originally published in the Connecticut Libraries newsletter was picked up by the ALA because of the Library's unique nature, or as Mr. Newman puts it, because it is a:

research center where everything maritime, from manuscripts to fine art, exists together in one location. The Mystic Seaport Collections Research Center is not just a library, or an archive, or a museum, it is all of these things.

In addition to a great description of all the resources contained in the Research Center the article also features a favorite image from the collection: The Crossing the Line Ceremony from "A picturesque voyage to India : by the way of China." by Thomas Daniell, B.A., and William Daniell, A.R.A London :1810


ILoveLibraries.org, is the American Library Association's (ALA's) website for the public, designed to keep America informed about what's happening in today's libraries, which are found in public, school, academic, corporate and institutional settings.
Posted by Kelly at 5:40 AM

The Big Oyster: History on the Half Shell

is an enjoyable read on the history of Oysters. Related from the standpoint of New York City's relationship with the ever popular bivalve it does, however, tend to neglect Connecticut's rich oyster growing history.

Fear not fans of the Collections! The following items both preserve and tell more of the story:

The Collections Research Center is ready for WoodenBoat, offering two days of expanded access to the ships plans collection and ships plans research. Visitors please be sure to stop by this Thursday and Friday from 10-5.
Posted by Kelly at 4:36 AM

There will be over 300 nautical quarterly magazines for $3 apiece and some 500 free periodicals and other free books at both entrances to the Museum.
Posted by Paul O'Pecko at 11:50 AM

Please note the following as they apply to the Research Room: 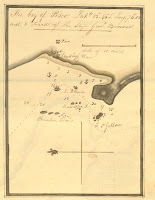 This month's staff pick is a chart/sketch of the "Gulf of California drawn from the surveys made by the Spanish Officers and pilots of St. Blas" the chart details soundings, tracks, anchorages as well as missions and towns. The sketch is from Coll 304, v. 7, of The William T. Skiddy Collection.
and can be viewed in the Collections Research Room. Pictured on the left is another harbor sketch by Skiddy showing the Bay of Pisco on the coast of Peru.

William T. Skiddy was an artist, naval architect, Captain and an entrepreneur. In 1805 at the age of ten he signed on as a cabin boy aboard the packet ship the ROSE-IN-BLOOM. After a voyage to Charleston, S.C. he returned to New York City and become an assistant steward for his step-father, John R. Skiddy, a ship captain of Stamford and New York.

With the exception of his three years of schooling in France he stayed in the merchant service until 1812. He then spent eight months as a prisoner of war when the crew of the Brig STEPHEN was captured by the British frigate ANDROMACHE. The day after his release he joined the US Navy and received his Midshipman's commission from President Madison. Captain James Lawrence ordered him to report to the HORNET as a master-mate where he served under the command of Captain James Biddle for the duration of the war.

In 1816 he returned to merchant service where he was given the command of the ship MARIA THERESA. He was in the South Pacific during the blockade of Callao by Lord Cochrane, at which time he ran the blockade and brought away the Spanish Viceroy of Peru.

During his many voyages along the Pacific coast he surveyed and charted many of the ports he visited including the Gulf of California chart selected as this months Staff Pick.

In 1844 he entered into the naval construction business with his half-brother Francis. Soon after he was appointed by the US government to superintend the construction of the Collins steamers, which were used as mail steamers.

During his life at sea, Capt. Skiddy kept a journal, and at some point in his life he transcribed them into two volumes entitled "The Ups and Downs of a Sea Life from 1805" which are excellent description of life at sea are also part of Mystic Seaport's wonderful collections.
Posted by Kelly at 9:26 AM

The National Museum of American History’s newest exhibit “On the Water, Stories from Maritime America” features a 8,500-square-foot exhibition hall dedicated to the exploration of America’s maritime heritage. In a recent interview, Museum Director Brent D. Glass explained that “The maritime influence on American history is one of the most compelling chapters in the national story,” and we couldn’t agree more.

If you can’t make it to Washington soon, the companion Web site to “On the Water” contains the same historical content as the physical exhibition. The site also features a searchable database that provides additional information and photographs for selected artifacts in the exhibition. Multimedia resources and educational activities, including an associated Flickr group where visitors can upload their own maritime-related imagery, round out the online experience.
Posted by Kelly at 7:20 AM

Two winners of the New England Regional Fellowship Consortium Fellowship contest will be conducting research at the Library this year. Michael Block from the University of Southern California will be researching New England Merchants, the China Trade, and the Origins of California and John Wong from Harvard University, whose focus is Global Positioning: China Trade and the Hong Merchants of the 18th and 19th Centuries.

The Consortium, which includes institution such as the Baker Library (Harvard, the Boston Athenæum, Bostonian Society, Maine Historical Society and the Mass. Historical Society hands out 10 $5,000 Fellowships each year with fellows required to visit at least 3 institutions for two weeks apiece for research.
Posted by Kelly at 5:13 PM