Over the past few months Dr. Stuart Frank of the New Bedford Whaling Museum has been doing an assessment of Mystic Seaport's scrimshaw collection. As one of the world's authorities on the subject, Dr. Frank is greatly respected for his knowledge and Mystic Seaport is happy to have his expertise put to good use here. One of the many pieces that Dr. Frank examined is a tooth from the so-called "Mechanic" scrimshaw artist. Unknown until identified by Dr. Frank and other members of his research team, the artist was identified in that manner because the scrimshaw in question came from an 1834-38 voyage of the ship MECHANIC  of Newport, Rhode Island. Dr. Frank and his compatriots are confident that the artist is one Spencer Pratt of Bristol, Rhode Island who was the first mate on that particular voyage. A partial description of the accompanying piece from Dr. Frank's work states: 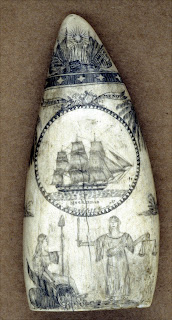 "..blindfolded figure of Justice standing, with left arm akimbo, the Scales of Justice suspended in her left hand, with her right arm outstretched, holding an upright sword. Above all of this is a circumferential band of stars, surmounted by a patriotic device of six flags lit by a radiant sun
or star." This is one of three teeth by Pratt in the collection at Mystic Seaport. Dr. Frank has similarly identified numerous other artists and subjects in the collection, information that will be gladly appended to our records.

The CHARLES W. MORGAN in Miniature....


One of the newest additions to the Collections at Mystic Seaport is an extraordinary model of the CHARLES W. MORGAN. This gift from a long-time friend of the Museum was built by master model-maker Lloyd McCaffery. Mr. McCaffery’s work in miniature is known worldwide for the incredible detail that he displays in all his work. Not only are his models built entirely from scratch, the tools that he uses to do his carving of figureheads, trail boards and other decorative pieces are custom made by him also. For example, his tiny scalpels are made using small wedges of razor blades. 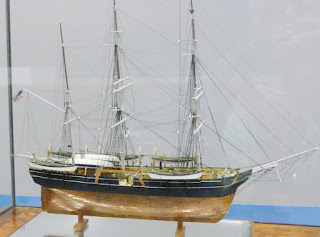 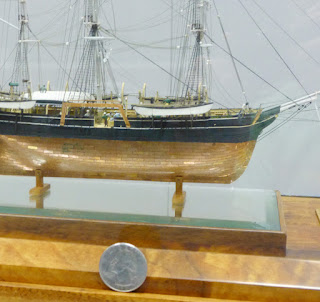 This model of the MORGAN contains a number of figures in miniature that bring the model to life. Not visible in these pictures is the cutaway section of the interior. What is visible is the scale as compared to the quarter in the foreground. Look for this model on display sometime next year as the real CHARLES W. MORGAN makes its way back into the water following her complete restoration.
Posted by Paul O'Pecko at 9:23 AM

The image here is the whimsical musing of British Naval Commander W.H. Coates. Three books of his drawings and their captions describe the experiences of Coates and his crew aboard the converted British minesweeper CLACTON in World War I during sweeping operations in the North Sea and Dardanelles campaigns. The CLACTON was sunk on March 8, 1916, by a German U-Boat, in the Mediterranean. 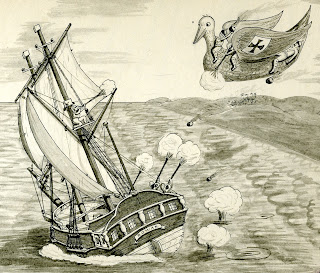 In this picture, Coates describes a German air attack on the ROWAN, another British ship, stating "Mercy me! We live in fearsome times!...This beast attacked ye hired armed brig ROWAN, dropping bombes and lances and retired...", along with much more "old English" text. Coates' imagination in depicting a 20th century conflict in 18th century imagery and words is truly a unique treasure in our collection.
Posted by Paul O'Pecko at 1:17 PM

A "Cool" Picture for Summer's End

A few years ago Fred Calabretta, Curator of Collections and Oral Historian at Mystic Seaport, orchestrated an exhibit entitled FROZEN IN after spending years researching the life of George Comer. The following text is from that exhibit:

"Captain George Comer [1858-1937] experienced a life of adventure, discovery and success. He traveled the oceans in search of seals, sea elephants and whales. Although a sailor by trade, his life is best defined by his remarkable relationship with people he encountered in the far North.

Young George and his widowed mother endured a life of poverty and wandering until he was placed with a foster family in East Haddam, Connecticut in 1869. Six years later, at the age of 17, he sailed on a New London whaleship bound for the Arctic. This cold and challenging land became his second home. Over a period of 44 years, he returned 13 times.

He possessed a fascination with the natural world, recording detailed observations of remote regions and collecting animals, birds, and plants. As he came to know the Arctic, something more captured his imagination. He was drawn to the Inuit - the native people of Hudson Bay. He marveled at their ingenuity and skills. Among these people he found friendship and a purpose. With little education or formal training, George Comer dedicated himself to the documentation of Inuit life ways and traditional culture."

Like many maritime museums, Mystic Seaport has a fine collection of items brought to America by sea from China. One such piece is a Chinese porcelain punch bowl. Illustrated in the Museum's book on the Treasures of the Collection, the caption reads as follows: 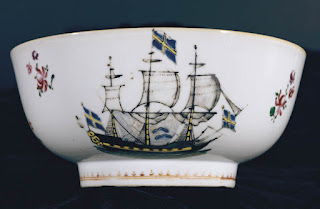 "Direct trade between America and China began in 1784 when the ship EMPRESS OF CHINA left New York for Canton carrying lead, lumber, cotton cloth, ginseng and silver specie. A year later she returned to New York with a cargo of tea, silks and porcelain, as well as this punch bowl, which had been purchased by the ship's carpenter, John Morgan, who died on the return passage."
Accession number 1938.77
Posted by Paul O'Pecko at 1:11 PM 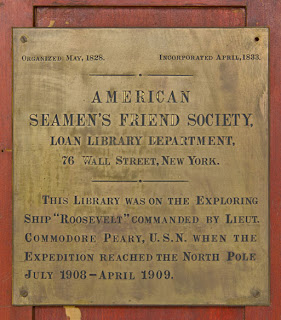 This plaque pictured here is affixed to the door of what is known as a loan library. Beginning in the mid-19th century, the American Seamen's Friend Society supplied three-shelved boxes fitted out with inspirational and practical books for use by sailors aboard ships. Volume 3, Number 1 of the journal CORIOLIS features an article about the thousands of libraries that went to sea and the handful that remain. The library described on the plaque is is one of three such libraries that reside in the Collections Research Center at Mystic Seaport.
Posted by Paul O'Pecko at 7:36 AM

The Common Log shown here (accession number 1934.9)was used to measure the distance a ship traveled through the water, thus allowing the calculation of speed. The log consists of a reel with line marked at set lengths with knots and a wooden "chip" attached. Additionally, a log glass, or half-minute glass similar in shape and function to an hour glass, is pictured. The process by which the log is used is called "heaving the log". It is usually a three-man operation with one person holding the reel, another the glass and the third the line with the chip. The chip, which is weighted on the bottom to hold it perpendicular in the water, is heaved over the lee side at the stern by the third man and at the appropriate time he commands the glass to be turned. The line runs off the reel, pulled by the resistance of the chip in the water, and after the glass is empty the line is stopped from paying out any further. The number of "knots" on the line that has run out indicates the speed of the vessel. For a more complete description, see the following link to the Museum's digital copy of William Falconer's 1815 book, A New Universal Dictionary of the Marine. 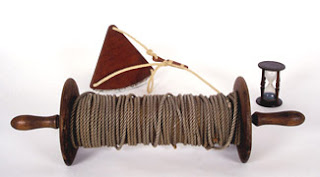 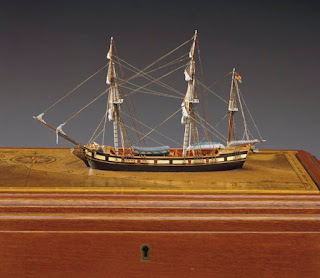 "July 5, 1832. In the morning we got under way, and stood out of the splendid harbour of Rio de Janeiro. In our passage to the Plata, we saw nothing particular, excepting on one day a great shoal of porpoises, many hundreds in number. The whole sea was in places furrowed by them...". Charles Darwin, The Voyage of the Beagle.

The model pictured is the H.M.S. BEAGLE as constructed by Alexander G. Law, an extraordinary modeler who worked from the 1930's through the 1960's. Law built everything in miniature. As an example, the case for this model is 7.5 by 11 inches, so the small scale of the model is evident. Law placed his models on hand-painted charts of regions traversed by the vessels, thus a chart of the La Plata River outside Rio graces this case. He would also place a book about the modeled vessel in a drawer fashioned into the case. Mystic Seaport has 20 models by Mr. Law and the BEAGLE can be seen in the exhibit, "Treasures from the Collection" opening in April. 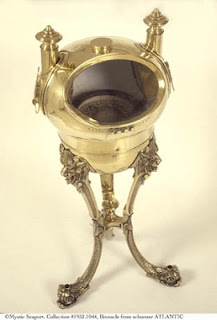 This binnacle stand, from the yacht ATLANTIC, rests on a decorative metal tripod with a stylized lion head at the top of each leg and a dolphin representation on each foot. It contains a 7" magnetic compass which is hung in 4-way gimbals. It has a brass hood with an oval reading window and 2 receptacles for oil lights, one on either side.

In 1905 the ATLANTIC won the Kaiser’s Cup in a trans-Atlantic record-setting time for a monohull boat that stood for nearly 100 years. The Museum has a number of artifacts from the ATLANTIC. 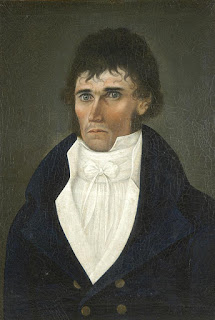 With the advent of the bicentennial of the War of 1812, it seems fitting to highlight one of the defenders of Stonington, CT during the British attack of 1814. The man with the intriguing eyes is Simeon Haley, captain of the Schooner Sally Ann. The portrait appears in the book America and the Sea: Treasures from the Collection of Mystic Seaport. The book will be brought to life as an exhibit in the Museum's Schaefer Exhibit Building at the end of March.

After participating in the battle, the next day Captain Haley was involved in a daring ruse whereby he purportedly sailed a small boat with a few other men to attract the attention of a British ship. The ship lowered a boat of marines to capture Haley's boat but Haley and company grounded the boat, and with the help of others on shore, captured the marines instead.
Posted by Paul O'Pecko at 8:02 AM