Conservation Work in the Greenmanville Church

The picture of the elegant diners is from the Grace Line passenger steamer SANTA PAULA in the 1930’s. In the background is a large 14 by 8 foot painting of the ship W.R. GRACE by Charles Robert Patterson which eventually came to the Museum in 1961 and has hung in the Aloha Meeting House (the Greenmanville Church) since that time. 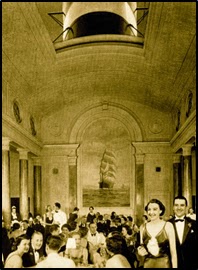 From its time aboard the ship and the intervening five decades in the church, the painting has built up quite a layer of grime. Two conservators from the Williamstown Art Conservation Center (at right) spent three days here in the Fall putting a little sparkle back into the clipper ship by stripping off some of the layers of dirt. The project was inspired by Bob Webb, a former curator at the Kendall Whaling Museum and the Maine Maritime Museum and a performer well-known in sea music circles. Bob passed away last year and one of his wishes was to see the painting conserved since, in addition to his other passions, Bob was also a writer and one of his books was a biography of Charles Robert Patterson, the artist. To help fulfill his wish, Bob’s widow Helen has been raising funds to help pay for the conservation work. Stop by and see if the painting looks a little perkier to you. And give a nod of thanks to Bob for helping to make it happen.

The work is a depiction of the W.R. GRACE leaving the coast of California in the 1880’s. There were four “SANTA” ships built in the 1930’s and each one had on board a painting done by Charles Robert Patterson. There is one in the Maine Maritime Museum that went to them from the W.R. Grace offices in Boca Raton in 1999. It is also a painting of the W.R. GRACE and is entitled “Report Me All Well,” and that one was in the SANTA ELENA. When the SANTA ELENA was turned into a troop ship, the painting came out and was later trimmed down and repainted to fit in the W.R. Grace company offices. The other two SANTA ships, the SANTA ROSA and the SANTA LUCIA, carried portraits of the ship M.P. GRACE. The whereabouts of those two paintings is unknown. The one in our church is considered the masterpiece of the four and the only one kept in its original round-topped, half-moon configuration.