Just released today, I Love It When You Talk Retro: Hoochie Coochie, Double Whammy, Drop a Dime, and the Forgotten Origins of American Speech

Who knew that sea slag would be retro! This new book explores popular terms such as "cut and run" which evolved from the habit of sailor who needed to leave the harbor so quickly, they would cut the lines and run, and many others.
Posted by Kelly at 7:45 AM

Just wanted to share with you some of the exciting collections newly available, thanks to our dedicated volunteers and staff. These collection registers can be viewed online from the Manuscript Collection Register page (http://library.mysticseaport.org/manuscripts/registers2.cfm) and our Access team is always ready to help or answer your questions. They can be reached by phone (572-5367), e-mail (collections@mysticseaport.org), or by visiting Wednesday through Friday, 10-5 in the Access Reading Room in the CRC.

Philip LeBoutillier (Oct. 20, 1880 - Feb. 1, 1972) was a New York yachtsman, businessman and philanthropist whose 54-foot yawl, STORMY WEATHER, won both the trans-Atlantic Newport-to-Bergen race and the Fastnet in 1935, and, in 1936, was the Bermuda Race Class A winner. Besides STORMY WEATHER, designed by Sparkman & Stephens in 1933/34, LeBoutillier owned and captained VIKING, a 49-foot cutter designed by F. Jay Wells in 1930; ALSUMAR, a 44-foot auxiliary sloop (30 meter class) designed by Sparkman & Stephens in 1930, and , as part of the Seawanhaka-Corinthian Syndicate, the six-meter sloop, NANCY, built in 1932.

Yachting lore has it that LeBoutillier had not decided on a name for what would become STORMY WEATHER as she was being built at the Henry B. Nevins Yard, City Island, New York in late 1933 and into '34. However, just before launching, LeBoutillier and friends were at a club in Montauk, Long Island, and listened as a young singer delivered a song that much appealed to him. He called the singer over to his table and asked her to sing it again. Lena Horne agreed, and the song, "Stormy Weather," made a name for LeBoutillier's new yawl as it did for Lena Horne.

LeBoutiller also had been asked by the original owner of ALSUMAR not to keep that sloop's name because it was derived from the names of the first owner's wife and two daughters. LeBoutillier politely declined to accede to the first owner's wishes, saying he was superstitious about changing the original name of a horse, a dog or, as it happened, a boat.

At the height of his business career, LeBoutiller was president of Best & Co., a department store specializing in women's clothing and children's wear. He was known for his generous wage and salary policies and for promoting from within. As the New York Times said in its obituary of LeBoutillier, published on Feb. 2, 1972: "He set up one of the first pension plans for employes as early as 1919, and few workers left Best & Co., with many continuing after marriage and with the arrival of children."

LeBoutillier was also regarded for his philanthropy, particularly his work for underprivileged boys. According to the Times, he raised $600,000 for the Boys' Club of New York, and was an organizer of the National Child Labor Committee, a group opposed to child labor.

Noank Shipyard Collection (Coll. 353): 1943-2000, of the Noank Shipyard in Connecticut. Includes a variety of manuscript materials and newspaper clippings. The manuscript materials contain information concerning boating safety legislation and taxes, correspondence, bills of sale for vessels purchased by the yard and miscellaneous drawings and notes. The clippings cover topics including Noank and Groton, Connecticut history, the development of the shipyard and its purchase by Donald Singer in 1964, the EMMA C. BERRY, the Noank Historical Society and their work, Tropical Storm Doria, the beaching of a whale in Noank, other miscellaneous boats and topics, zoning disputes over the expansion of the yard and finally its sale.

The Noank Shipyard was originally organized by brothers John and Robert Palmer in 1850. Both had previously worked with their father John Palmer Sr.at various locations around Noank. The new shipyard was officially named "R. & J. Palmer" but was generally referred to by locals as simply the "Palmer yard." Robert took full control of the company in 1879 after his brother's death and then brought his own son Robert Jr. into partnership in 1880. The yard was then officially renamed Robert Palmer and Son Shipbuilding and Marine Railway Company. During the late nineteenth and early twentieth centuries the shipyard was the largest facility for building and repair of wooden vessels in southern New England, employing over 300 men. The yard specialized in building railroad car floats, schooner barges, and dump scows as well as fishing smacks. Robert Palmer and Son went out of business in 1914 with the passing of the Robert Jr. who was also known in Noank as "Deacon" Palmer because of his close and active connections to the Noank Baptist church. During World War I the yard was reactivated by the Groton Iron Works but fell into general disuse until another resurgence of activity during World War II. After the second world war the yard once again fell into disrepair until Donald Singer purchased it in 1964. Singer turned the old shipyard into a model marina catering to the post war boom in pleasure boating. After a series of zoning disputes Singer sold the Noank shipyard in 1980. Today, under new ownership, the Noank Shipyard is still a very active marina and repair facility and remains, as was the case with it's predecessors, a focal point of life in the village of Noank.

The Navigation Workbook, ca. 1820, of Joseph Robinson is now online at the request of the Education Department who plans to use the workbook as part of an off-site math class. The workbook contains rules and problems for plane, traverse, Mercator's current and middle latitude sailing, instructions for keeping a journal, description and use of Hadley's quadrant, use of log line and half-minute glass, rules for correcting dead reckoning, illustration, and sketches. It also has some great drawings. (this one of the mariners compass is now my desktop background)
Posted by Kelly at 11:41 AM

The Collections have again been tapped for a ground breaking book: Making Freedom: The Extraordinary Life of Venture Smith (Includes Bibliographical References and Index)

"is the first in-depth exploration of the life of Venture Smith (1728–1805), a New England slave who was sold into bondage as a boy in Africa and labored for nearly a quarter-century before purchasing his own freedom and transforming himself into a highly respected American citizen." Many of the events in this remarkable life all took place within 50 miles of Mystic Seaport and in addition to revealing the trials of 18th century slavery also tell a story of how integral the maritime experience was to the local inhabitants.

As of March 18, 2009, the following fees apply to Collection products and research:

All order taken prior to March 18th will be processed at the previous rate.
Posted by Kelly at 7:07 AM

Goran Buckhorn, Mystic Seaport's rowing expert, started a blog dedicated to rowing last week. In Goran's own words the blog will cover "all aspects of the rich history of rowing, as a sport, culture phenomena, a life style, and a necessary element to keep your wit and stay sane." So far his posts have reviewed some great books on rowing history.

This weekend he posted on the National Rowing Hall of Fame, located in the G.W. Blunt White building.
Posted by Kelly at 4:04 PM

Bond of Union: Building the Erie Canal and the American Empire 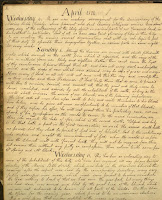 delves deeply into the promoters and politicians who brought the canal into existence, and most importantly includes references to MSM's diary of Christopher Prince, 1821-1825. The diary is part of the Records of the American Seamen's Friend Society.
Posted by Kelly at 1:27 PM Reputedly a sister ship of the L. A. Dunton, the Joffre has been discovered off the coast of Gloucester. Like the Dunton, the Joffre was designed by renowned naval architect Thomas F. McManus, and built at the Arthur D. Story of Essex, MA. Unlike the Dunton her career ended when her engine caught fire as she was returning to Gloucester, MA on the evening of 9 August 1947 and She subsequently sunk. For more information...
Posted by Kelly at 7:51 AM

Bill Peterson's, the Collections' Carl C. Cutler Chair of Maritime History, history of New London's seaman's fraternal organization is featured this month in the Hog River Journal.
Posted by Kelly at 9:35 AM