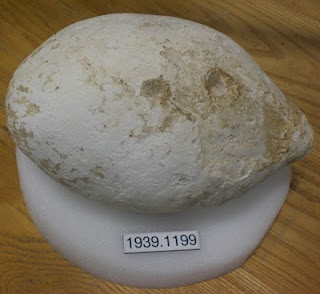 No, this is not part of the skeletal remains of some maritime ghoul, but something far more scary to those that have had experience with such things. It is a kidney stone. And not just ANY kidney stone. It is fully eight inches across and weighs in the neighborhood of five pounds! The poor soul who suffered with this stone was not a lonesome sailor drifting on the high seas, but a pained mammal making their way beneath the waves. It is a kidney stone from a whale.

The stone came into the Collection in the Museum's early days in 1939. In 1965, a Museum member, Chief of Urology at a New York Hospital, spotted the stone in an exhibit and was granted permission to make a study of it. His findings concluded that, unlike a human kidney stone which is made primarily of calcium, this stone is chiefly made of magnesium. His conclusion was that the whale's diet of creatures with high magnesium content caused the unusual growth.

So this Halloween, be grateful that your night-time visitors are pirates and aliens and not, luckily, a five-pound kidney stone.
Posted by Paul O'Pecko at 4:58 AM