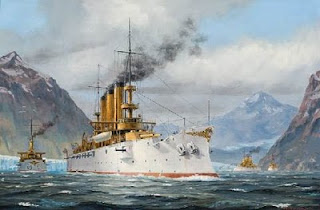 Mr. O'Brien's extraordinary painting shows the pride of the American Navy in the first decade of the 20th century as it navigates its way through the Straits of Magellan and around Cape Horn. While the Museum often picks a painting with a modern commercial seafaring aspect to it, this painting spoke so strongly to the Museum's charge as the "Museum of America and the Sea" that it was just too difficult to pass up. The fact that the largest vessel, and flagship of the fleet, was the U.S.S. CONNECTICUT made this a tailor-made painting for the Museum's permanent collection.

Congratulations on a fine job, Patrick.
Posted by Paul O'Pecko at 5:41 AM