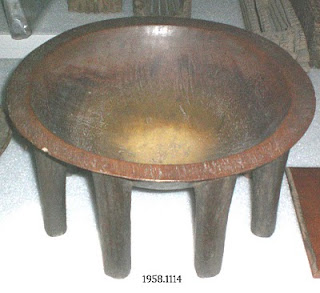 A number of objects belonging to Robert Louis Stevenson, author of Treasure Island and numerous other well-known works, came to the Museum in the 1950's. Stevenson spent his last years in Samoa, dying there of a probable cerebral hemorrhage in 1894 at just 44 years of age.

Stevenson speaks frequently of drinking kava (or ava) in numerous letters written while in Samoa and kava appears in some of his novels as well. He describes the process of making this "intoxicating" drink from the root of a pepper plant, where the root is chewed by "fair damsels" to soften it and then it is combined with water and strained in a wooden bowl. That wooden bowl is known as a kava bowl. The kava bowl pictured here is from Stevenson's household in Samoa. It is carved from a single piece of wood, has eight legs and is four and a half inches deep. Kava was a ceremonial drink and Stevenson writes of making speeches to, and listening to speeches by, chiefs in Samoa before imbibing. To drink kava, one traditionally used a kava bowl or a cup made from a coconut. Our collection also contains one of Stevenson's coconut cups and numerous other objects from his years in the South Pacific.
Posted by Paul O'Pecko at 5:30 AM