On March 12th, 1904, Andrew Carnegie signed a Deed of Trust in New York City to create the Carnegie Hero Fund to recognize deeds of civilian heroism. Carnegie was inspired by a mine accident near Pittsburgh to create this fund with a beginning corpus of five million dollars. One of the stipulations in the deed of trust states, “A medal shall be given to the hero, or widow, or next of kin, which shall recite the heroic deed it commemorates, that descendants may know and be proud of their descent. The medal shall be given for the heroic act, even if the doer be uninjured, and also a sum of money if the Commission deem such gift desirable.”

A recent inquiry to the Museum brought to light once again that there is a Carnegie Hero Medal in the collection at Mystic Seaport.  There are countless acts of heroism associated with sea rescues over the years, and the Museum has quite a number of lifesaving medals in its collection attesting to that fact. However, the Carnegie Hero Commission was established expressly to recognize such acts and the Commission must agree that the act recognized is worthy, making this medal of particular interest.

“Woman Lashed to the Mast in Schooner Wreck,”; “Lashed in Rigging Seven Hours, 15 Owe Lives to Brave Fishermen,”; “The Heroic Fishermen.” These are a few of the headlines in January of 1910 after the Captain, his wife and crew of 12 (not 13 as reported) of the six-masted schooner MERTIE B. CROWLEY wrecked on the south coast of Martha’s Vineyard. The captain of the CROWLEY sealed the schooner’s fate when he mistook the Edgartown light for the Block Island light and ran the vessel aground. Captain Levi Jackson and his crew of four of the fishing sloop PRISCILLA set out from shore and managed to brave the storm and the waves for 13 miles and then retrieve the imperiled group from the schooner using the sloop’s dories before the CROWLEY completely broke up.

The medal, as can be seen here, has a likeness of Andrew Carnegie on the front and the following appears on the back: "AWARDED TO LEVI JACKSON WHO HELPED TO SAVE WILLIAM H. AND IDA M. HASKELL AND TWELVE OTHERS FROM DROWNING  EDGARTOWN, MASS. JANUARY 23, 1910."

To see a more detailed account of the rescue, see the account by Levi’s great-grandson on the Carnegie Hero Foundation site at http://www.carnegiehero.org/awardees/profiles/jackson/. 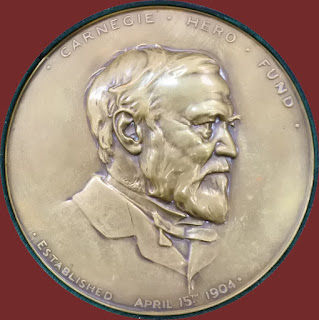